Mehreen: “The veil is my personal choice and I am happy with it”

Islam requires Muslim men and women to dress modestly. Male modesty has been interpreted to be covering the area from the navel to the knee. For women it is generally seen as covering everything except their face, hands and feet when in the presence of men they are not related or married to. However, there has been much debate within Islam on the issue. This has led to a distinction between the hijab (literally "covering up" in Arabic) and the niqaab (meaning "full veil"). The hijab is typically a scarf that covers the hair and neck, whereas the niqaab is a veil for the face that leaves the area around the eyes clear. It is worn with an accompanying headscarf or an abaya, a full-length robe, and sometimes with a separate transparent eye veil. 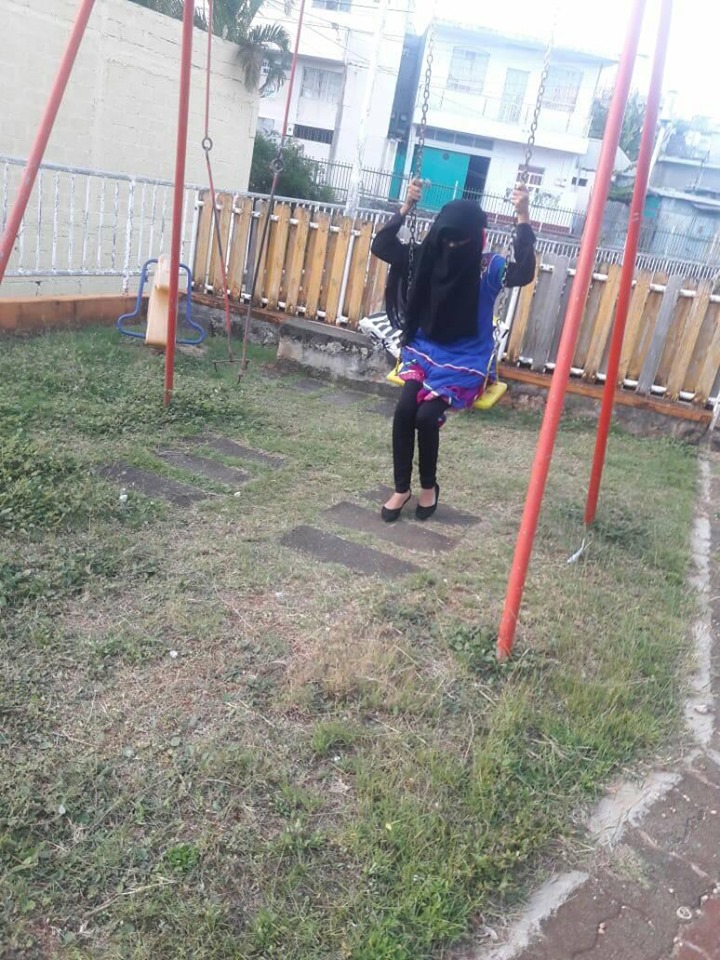 Please tell us briefly about about yourself

I'm Mehreen, 27 years old and a mother of a two-year old daughter. Currently unemployed, I like reading, playing badminton and going to zumba classes.

When did you start wearing the Niqaab?

Candidly, wearing the niqaab has always been on my mind ever since I was in college. After the unexpected and sad demise of my mum, I had to put an end to my studies and focus on work. That's what I did. Everything changed for me in 2016. One Sunday morning, as I went for jogging as usual after Fajr (morning) prayer, I saw a lady and she completely changed my life… I don't know her...not even her name... I knew nothing about her. She was wearing her niqaab and running slowly...I had to approach her. In my eyes she was so beautiful and strong, jogging with her niqaab...she still is. I questioned her...questions like 'Is it easy to run with it? Do they laugh at you?' etc. I felt fascinated by her attitude and appearance. What I saw was a happy woman, healthy, sporty, jogging merrily, just like all the other women at the park. The only difference was that she was wearing a veil on her face. But that did not make her any lesser woman than the others. That’s when I DECIDED to start wearing it. In 2016...it was the first day of Ramadan…

So noone forced you to wear it, it was your personal decision…

Yes. Niqaab is something beautiful. It's not obligatory but it's a choice. Many would find it weird but whether we wear Niqaab or not we are normal human beings. We are not different from others. We are still a woman with it, right? Noone forced me and I was not brainwashed or coerced into wearing it. I did not attend any lecture, etc. I just decided that I wanted to wear it and that’s it.

Yes but why did you choose to wear the niqaab?

Wearing it was my choice as I said. No one forced me...no one has the right to stop me as well. All those who are wearing it are WARRIORS. I respect those ladies. They are brave. Some women feel liberated by some actions and I feel liberated by my niqaab.

Many people, especially in the western world, say the niqaab is a sign of oppression for women. What do you have to say to them?

This is so funny. Come on...oppression? I mentioned before it's a choice we ladies make so how come it's an oppression? It's not even obligatory. Some men like their wives to dress up for themselves and like them that way...as long as their husbands accept them that way...what do they need more, huh? Some ladies simply like to be hidden from other men’s gazes besides their husbands, brothers and dads....what is wrong with that? How come some people can easily accept someone in complete nudity but when it comes to someone covering the whole body in full modesty, they are like...'OMG...hahahaha...look at her… Ninja... blahblah?'  Whenever I hear this I feel much stronger...being called a Ninja means so much like come on guys...better be called a Ninja than an idiot.

Personally I don’t really like make-up. And I’m not so much into jewellery, except for items like rings. But in general, I don’t see why the Niqaab would prevent women to wear make-up or jewellery. True it is that the make-up or jewellery will not be visible to others, so people might think what is the use of wearing them if you are then covering them with your niqaab, but the point is that women don’t necessarily wear make-up or jewellery to please others, but first and foremost to please themselves. Secondly, women dress up, wear make-up and jewelleries and other fashion adornments to please their husbands only, not to show off to other males. The niqaab is what we wear when going out, but once in our home we can wear what we want, I myself wear sleeveless shirts at home. So the conclusion is, yes, niqaabi women do indulge in fashion just like other women but for their husbands only! And I find absolutely nothing wrong in that!

What are the difficulties you face in your daily life because you wear the niqaab?

Difficulties? The most common one is the eyes of some people on you. Fortunately, it’s a minority. The way they look at me...staring...fixing those eyes on me makes me wonder whether they are crazy! Those eyes...I wish they could stop doing that...it's so irritating. Moreover...they would call us names... Ninja.... Terrorist… Monsters...Backward women, etc. It does hurt but seriously...who is the real monster here: the silent one living her life peacefully according to her wishes or the one shouting weird names at her and trying to dictate how she should live her life and criticising her for her choice? We didn't do anything wrong to deserve those names. I'm using "WE" because I'm also speaking for the other veiled women who face what I've gone through and what I face everyday. We believe in freedom of women, and I feel I am free to wear what I want and people should respect my freedom to choose.

Have you ever been discriminated against because of the veil? For example, is it easy to find a job?

Ah! A BIG YES... DAMN IT! I'm a hardworking person. I love working. I had a job...in 2017, I got married and had a baby… in other words I had to leave my job. The nightmare started when I decided to resume work when my daughter was 1 year and 4 months… I really want to work. I went to some shops which advertised for salesgirls...I wish I didn't go...they were like... “Would you be able to work with that thing?” or “Our clients would not accept someone like you sorry” or “If I ask to remove it, would you do so?” Hey…come on! I worked as salesgirl before I got pregnant with my niqaab and everyone got used to it so what's wrong? What makes you believe that we lost our ability to work simply because we are wearing a veil…huh? We can work. We can walk. We can drive. We can run. We are still the same person after all.

How do members of the public react when they see you? Have you ever faced criticism or taunts in public or do people do respect you?

Well, there are some who would make comments while for others we are are invisible; even in some shops, staff would pretend we don't exist and serve other clients. But there are people who respect us, and I’m glad they are the majority: people from all customs and background. They show sign of respect and tolerance.

Some countries have banned the veil because of security issues, they claim a person's face must be visible. Do you agree the niqaab is a threat to security when wrongly used?

It's not a threat… when it comes to security issues we do accept to show our face. That's what I do at the bank for example… it's a procedure so I accept that. They are doing their job. Not a threat, seriously, if they want to check my face, I would abide obviously. Wearing the niqaab does not mean I would not respect the law, I remain a law abiding citizen. It's their duty mais de loin à interdire le Niqaab c'est inacceptable. Ce n’est pas une raison valable.  If someone walks in public without wearing anything or next to nothing, would they ban him/her for that? Would they put the same law to those who don't wear anything?

Does your husband or do your children accept the niqaab?

I wore it before meeting my husband... he accepted it and accepted me as I am and with it. My baby knew me that way when she was still in my womb so she is used to it and it’s perfectly normal for her. But yes, after marriage, at times, my husband asks me if I want to reconsider my decision.

There is a school of thought in Islam that says covering the face is not compulsory. A woman should cover her body except her face and hands. What do you have to say about this?

It's true, it's a sunnah (recommended) means it's not obligatory. Just a choice.

Does the niqaab prevent you from leisure activities such as swimming, trekking, sports, socialising, etc?

Nah... I do jogging in my niqaab at times... I practise  zumba... but only in classes for ladies. I'm planning to do other sports as well soon. Actually, I want to show people that we niqaabis are strong people too. The niqaab should not be seen as an obstacle to normal life.